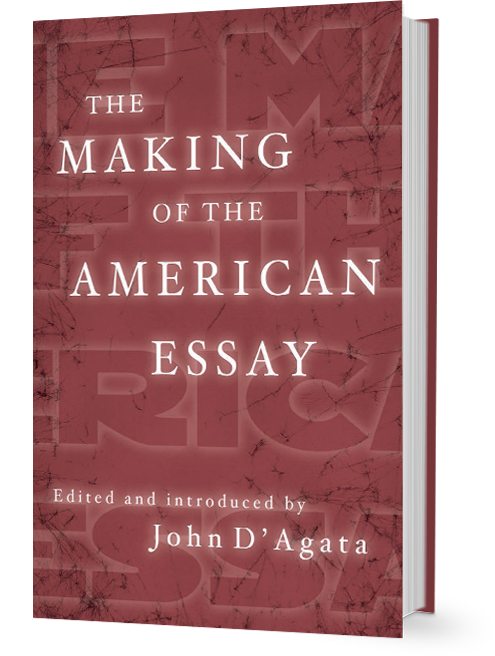 The Making of the American Essay

The second volume in A New History of the Essay, celebrating major American essays from the 1600s to the present.


“D’Agata . . . has spent the last 15 years trying to use the essay as Defoe used the novel: to get out of the impasse over what’s real and what’s not, and to solve the anxiety over the veracity of the media we consume, this time by foregrounding that anxiety itself, and asking us to confront it head on. His trilogy, A New History of the Essay, is a thoughtful alternative road map to how we might think of the essay and its role in the current moment.”—Los Angeles Times

“D’Agata’s pioneering spirit in these volumes offers one of the most broadminded views of creative nonfiction in the persona of the essay.”—Signature Reads

“John D’Agata is a champion of the essay, a crusader for lost forms, a defender of nonfiction as an art. . . His project—that of reshaping the genre of creative nonfiction—is a bold one, and in these anthologies, the [essay] becomes a spiritual vessel, a portal to deeper truths.”—Iowa Review

“An ambitious project that casts far and wide for exemplary contributions to the essay as a risk-taking work of art. ”—Lambda Literary

“D’Agata, whom I’ve come to think of as a literary anarchist, seems ultimately to dream the dream of all radicals: freedom. . . If you listen just right, his anthologies will tell you that the essay is not a genre—which is why D’Agata never defines it—but something universally human, an action and an orientation towards the world, an attempt to make meaning from the raw material of fact. And if you listen just right, it’ll finally come clear that ‘collection’ is not the correct term for D’Agata’s trilogy, which is, instead, a history of unknowing, of which D’Agata places himself as an inheritor (this is why each book revolves around his birth), and an extended, three-volume argument, performed as much as proffered, that facts never mean what they say, that there can be a poetry of fact. Facts are metaphors that can be rung like bells, and the essay, a form fabricated from fact, an attempt to strike a fact in such a way that it sets a thousand other facts resonating sympathetically, thereby raising from the cold, rational, dead past a living chorus of souls all in harmony.”—3 AM

"Ben Lerner and Knausgaard and David Means and that whole style/school/movement are intensely pursuing the same sort of track as D’Agata is here arguing for…. That may be the strangest aspect of this monumental undertaking he’s now completed: while it’s impossible to guess the full measure of its impact, what it’s already done to contemporary literature is profound…However the contemporary canon ends up being adjudicated and constructed, you’d be wise to put money on D’Agata and this trilogy having a significant presence in its DNA.”—Brooklyn Rail

“Quixotic … ambitious….What D’Agata has in mind, on one level, is to push the conversation, to throw a thought-bomb into the center of the room.”—Lit Hub

“There is something irreplaceable about this anthology . . . D’Agata rightfully emphasizes that literary essays are made things, that imagination and keenness of observation are just as essential to their composition as when an author elaborates fictional characters and fictional scenarios. . . The insufficiency of our genre distinctions is a preoccupation of John D’Agata’s three-volume, 2,000-page anthology A New History of the Essay, one of the more interesting editorial projects published in the last several years.”—Quarterly Conversation

“I would say that out of the twenty years I’ve been doing this show there are few books that I’m certain will be read well beyond the show’s lifetime, and it’s been an honor to be associated with them.”—Bookworm

“John D’Agata is America’s most intellectually eloquent reader of the essay. His passion for the form has led him to search for and discover a treasure trove of what the genre is capable of. With this third and final volume of his long labor of love he gives us a defining work of reference that will serve generations to come of essay readers the world over.”—Vivian Gornick

“John D’Agata has given our civilization an inexhaustible gift with his three massive compendia of the recent past, the remote past, and the ingenious present and speculative future of the essay. Monumental and intellectually and imaginatively generous, these books are not only absorbing reading but wonderful examples of how, in the right hands, the act of anthologizing becomes an art in its own right.”—Vijay Seshadri

“John D’Agata is a groundbreaking literary activist. It is due to him and these anthologies that the most exciting writing today is happening in the realm of nonfiction, in particularly the realm of the essay, which he has, near-single-handedly, rescued from the literary dustbin and turned into a vital contemporary art form. A New History of the Essay is essential reading for anyone interested in the future of nonfiction.”—Heidi Julavits

“Please, if the world gets blown to smithereens tomorrow, let this series be the one that tells the next civilization all that we thought and dreamt and said. John D’Agata has done something truly remarkable here: as archivist and archaelogist, as artist and impresario of the purest literary form—the essay—he has left a dazzling record of, as he puts it, ‘our human wondering.’ A New History of the Essay is learned and idiosyncratic, addictive and wildly entertaining. It belongs on every shelf.” —Michael Paterniti

“It’s clear that the past fifteen-or-so years saw a rethinking and a rebirth of the essay, and equally clear that John D’Agata’s work was essential in both. He pushed the form forward with one hand and extended our grasp of its roots with the other. He remains as exciting to read as to argue with, and his hunting in the worlds of lost nonfiction has shown me many new writers and texts. A New History of the Essay completes a series on the subject and brings the achievement of all three books into focus. It is major.” —John Jeremiah Sullivan

“Nothing could be sweeter than another hugely ambitious and visionary gathering of essays from John D’Agata and Graywolf. In the preceding anthologies I’ve sat in my chair and circled the world, sought out the past, and looked into the future. Now set squarely in America, once again the essay, that most humble and solitary of forms, finds its epic account, rising out of a flood and sweeping toward a horizon of ellipses, a leaving off and a farewell that generously makes room . . . for more . . . more of our voices, more of our shapes, more of our secrets and uncertainties, more of the teeming and inventive energy inside the simplest facts . . . and more of us, reader and writer alike, because in the end this wild and wandering epic is our song to sing.”—Charles D’Ambrosio

“At last A New History of the Essay completes John D’Agata’s anthology series, A New History of the Essay. Here the crucial middle years—how we got here—have been filled in, and we can understand anew just how the essay, our American essay, has grown and lived and been written and rewritten. This canon-making is a major undertaking and an astonishing act of literary generosity for which we all should be grateful. As D’Agata puts it, ’The world, we all know, is already a nonfiction. Let the essay be what we make of it.’ Emphasis on the make—these are the essays we have made, and of these essays we are made—but also on the we. The essay may be a solo thing, but these are songs for all of us to sing.”—Ander Monson

“John D’Agata’s anthologies are always stimulating, provocative and full of surprises. They invaluably extend our notion of what an essay is and can be, and this third volume provides the fitting capstone to a brilliant, insanely ambitious endeavor.”—Phillip Lopate

“John D’Agata’s alternative histories of the essay are anthologies in the same way the aurora borealis is actually a bunch of charged collisions; in his books we get to see pieces of art crash against his own restless brilliance. In this third installment, he is once more a stunning curator, giving us the story of the American essay as a strange, nimble creature—vexed and incandescent in its uncertainties, constantly surprising in its negotiations of anguish, mischief, and awe. Here we find ancient varieties of wonder and doubt provisionally fleshed in captivity tales and curiosity cabinets; we find silence and insomnia, blood and swollen moons. This American history is also a history of unknowing itself: a record of the human impulse to metabolize the world and a record of this impulse continually meeting the world’s infinitudes.”—Leslie Jamison

“For well over a decade now, John D’Agata has been the renovator-in-chief of the American essay. As practitioner and theorist, writer and anthologist, as example and the enabler of examples, D’Agata has refused to yield to the idea of non-fiction as stable, fixed, already formed. . . . Instead, he has pushed the essay to yield more of itself, to find within itself an enactment of its own etymology—an essaying, a trying, a perpetual attempt at something (after the French verb essayer, to try). He has emphasized that the essay should make, and not merely take; that it should gamble with the fictive and not just trade in the real; that it should entertain uncertainty as often as it hosts opinion; that the essay can be as lyrical, as fragmented, as self-interrupting, and as self-conscious as the most experimental fiction or verse. . . . ‘Let the essay be what we make of it,’ is D’Agata’s refrain, and his three large anthologies have made good on that promise.”—James Wood

“John D’Agata has provided a wonderful—and useful—map of the vast territory that is the American essay.”—Lewis Hyde